One of my new favorite blogs (I actually only discovered Jade after searching for who was hosting the August Carnival) is Evil Machinations, run by a lady named Jade who happens to be not only a passionate RPG blogger, but also happens to be passionate about another of my interests: martial arts. Her stuff is a joy to read, and I heartily recommend you check out her archives. Her series on the town of Meadowbrook is especially awesome.

This month’s Carnival is focused on Teaching the Game: something I’m both passionate about and very, VERY experienced with. If you’ve been keeping up with The Action Point, you’ve heard me reference the multiple games I ran while deployed to Iraq. The really awesome thing about those games is that they all started out with less then half of the players being experienced with any kind of RPG at all– and now, all of them have gone on to play other games with other GMs, and I know for a fact that at least one game will be running in Iraq without me when my unit heads back to the Sandbox come February (I’m looking at you, Guptill! You’ve been called out in front of the entire Internet!)

Every single one of my campaigns since Sept 11, 2001 (which is a story for another post on another day) has had at least one member of the group without any RP experience at all and/or experience with the system we were gaming with at that time. I know that many of you who are going to read this have had the exact opposite experience: all your groups have been experienced gamers who knew the system, knew the “groundrules” of tabletop gaming, and came to the table with character sheets ready and dice ready to roll. That is most certainly NOT my experience, and to you who have had it the easy route, I gotta say: I feel kinda sorry for you. Having the teaching element in all of my games for the past ten years has helped my GMing more than just about anything else I could have done to hone my skills. And I’ll tell you why.

1) You’ll never know the rules as well as when you are forced to teach them. It’s an old training adage that recirculates through the military constantly: if you want to know how to do something, teach it. Explaining the rules to someone who’s never seen a polyhedral in their life forces you to put yourself in their shoes, to find the common ground between you and them in order to explain what you’re doing in a way they’d understand. I have, in the past ten years, used the metaphors of American Football (both on the field and in the locker room), the military (REPEATEDLY), and even the relationships between a pimp, his hos (hoes, ho’s?…) and the inner-city gangs who fight over turf to explain core concepts of RPGs to people who were either curious about gaming in general or were gaming with me for the first time. And every single time I have gone back to square one and helped a friend or acquaintance break into the world of RPGs, *I* have learned more about a) the intricacies of how the game works, b) some aspect of the rules I wasn’t as familiar with before, c) interacting with my players better, or d) the base, core fundamentals of playing RPGs. I think we as GMs can agree that every one of those things will make you a better GM in the long run. 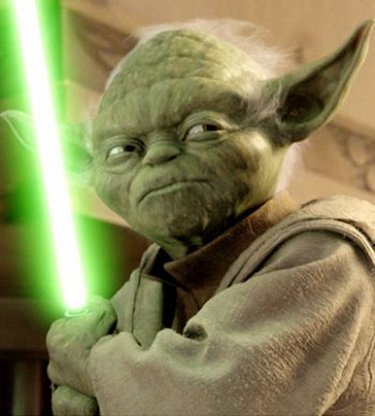 This is you, GM. The new player is Luke. Do the math.

2) Newbies don’t have any bad habits to unlearn. This is, in my opinion, one of the most glorious things about bringing new people into the hobby. We’ve all gamed with That Guy(tm). You know him, and experienced GMs can usually identify That Guy(tm) within the first few sentences from his/her mouth. The guy that always, ALWAYS plays some tiny variation on the same character theme… the guy who may play different race/class combos, but the personality is always the same… the guy who has the slightly or extremely shady dice-rolling habits… the guy who repeatedly forgets his character sheet or “forgets” to put money in the pizza pot… or knows (or worse, only THINKS he knows) the rules better than you and questions your judgements–but only when it hinders his character… the list goes on and on. The really, totally cool part about new players? They can’t be this guy coming into your game, and here’s a secret that most people aren’t going to tell you: if you’re this person’s first GM, you are going to have greater impact on this person’s gaming style than anyone else they’ll ever play with. Re-read that sentence, GMs. Then re-read it again. As the preachers say, “get it down in your spirit”.

Nobody in that new player’s entire career will have more power over how this person thinks and feels about gaming than YOU. It’s really a huge responsibility, when you think about it. We’ve all known the person who says, “I don’t like D&D. It’s just a crappy game.” or some variant, and when you ask them about it, their bad experience has nothing to do with the game itself: THEIR FIRST GM SCREWED UP, AND NOW THEY ARE NEGATIVE ABOUT GAMING ENTIRELY. I can’t tell you how angry this makes me, because that one GM’s poor treatment of that one player can have far-reaching consequences. As our hobby has grown and prospered, two, and three and soon four generations of gamers have been brought into this hobby by their parents. That GM who poisoned that player on our hobby killed what could have been generations of gamers– gods above know that person’s never going to sit down ti play D&D with their kids if they don’t like the game themselves.

But it doesn’t have to be that way. With just a little bit of forethought and conscientious gaming, you can nourish a playstyle that will be a boon to all the GMs that player will ever encounter. Encourage the newbie, particularly in the first few sessions, to buddy up with a player who plays in the way you as GM want the newbie to emulate. The experienced player will rub off on the newbie in ways they don’t even realize– encouraging organization, good decision making, playing well with others… all kinds of positive things that will help not only your table but all the tables that new player will take from your table to the next, and the next.

3) New players can recharge your gaming group. This isn’t *always* the case, but I have seen it to be true far more often than it is not: if your group is headed towards burnout, or has become jaded or acquired that “been there, done that” mentality, the new player can infuse a wide-eyed sense of exploration and mystery to the group that quickly becomes infectious. If the newbie comes to the table excited to play and wondering what comes next, the more jaded players will, at least a little but possibly more, pick that up as well. And helping the newbie learn the rules is a group effort, don’t forget that.

4) New players keep your Rules Lawyer under control. I have found that one of the absolute BEST ways to keep a Rules Lawyer under control–or at least on a convenient leash– is to put them right beside the new player around your table. You don’t even have to say anything to the R.L., I promise you. They won’t be able to help themselves– they will by their very nature gravitate towards the new player and help them get the rules down. The absolute last thing they want, even if they don’t realize it, is someone else at the table asking more rules questions than they do. It’s part of the R.L.’s psychology– one of the ways they get enjoyment out of the game is filling that niche. So use that to your advantage and let the guy with the most book knowledge at the table impart some of that knowledge to your new player. Just be careful that the R.L.’s personality–which we all know can be slightly…um…difficult to handle in large doses– doesn’t become a negative influence on the new player. It’s a fine line, but I have found the benefits to the new player and the table in general to far outweigh the potential drawbacks. Just keep #2 in mind at all times and you’ll be fine.

5) New players encourage you as a GM to say “Yes”. For the first few months at least, the new player has no pre-conceived notions of how gaming “should” go. They’ve never fought a dragon. They havent progressed past the point that kobolds are beneath their notice. They don’t know to run like hell from a beholder. They don’t have any of the experiences in-game or otherwise that can at times detract from a gaming experience. Skeletons can be a frightening thing as they shamble down a dank, cobwebby dungeon hallway. They will do stuff an interact with your PCs, monsters and NPCs in ways that an experienced player just wouldn’t think of. New players who haven’t had years of  “no, the rules won’t let you do that” behind them will also want to try more stuff that other players just won’t think of– and just like in #3 above, this can rub off on your other players as well. When they see the new player ask if he can make a running leap, vault off a table and impale the badguy with their spear–and you LET THEM TRY, regardless of the rules– the other players will see that Moment of Cool (also another post of its own) and will also want one of their own. This actually happened in one of my Iraq campaigns, and the change in the rest of the group was almost instantaneous. The newbie pulled off the charge-table-vault and rolled a crit on the attack (3.5 rules, X3 crit… oodles of damage), and there was a startled, stunned kind of silence for about two seconds from the experienced players at the table. The look on their face was, completely obvious–“The GM let him DO that?”  and then, almost in unison, they looked at each other with wide grins that said just as clearly, “I’M gonna do something cool like that, too!” If you tell your players you’re willing to say yes, they might follow you. If they see you do it live and in person, it can revolutionize the way your gaming group plays and interacts.

There’s a lot more I could say on this topic, but there are going to be a plethora of other awesome blogs hitting the topic in the next few weeks. Feel free to comment– I’d love to hear what you think about what I’ve said, and about teaching the game in general. just like we as GMs can and should teach our players, we should also teach other as GMs, too!