Cartographer’s Guild = Made of Awesome

I’m working hard currently to get an online Google Wave game off the ground, and I have brought several new players in to get things running. we’re going to be using a bastardized version of the FATE 3 rules, using elements of the Dresden Files RPG by Evil Hat and Legends of Anglerre.

I’ve mentioned my campaign world, Brittanis, just a couple of times before. I, like many of you reading this, have homebrewed for years but never have been able to make a satisfying map of my world. I saw all the awesome, professional-grade maps out there in Dungeon and Dragon and it made my heart bleed just a little. I wanted my world to be displayed in all the glory it deserved; Brittanis sat in my head for almost 20 years trying to get out and I just never had the artistic skill to get it on paper they way I wanted.

I had pulled maps from the Cartographer’s Guild on many occasions; I collect maps just because I love to look at them and imagine the stories of the people who live in those places– it has helped me cobble together an adventure idea on so many occasions I can’t count. As I wandered the CG forums, I noticed that the sheer amount of awesome maps being produced couldn’t be a co-incidence: these guys had to be learning how to do this awesome stuff SOMEWHERE. So I started looking around for tutorials, and sure enough, there they were! I downloaded GIMP, a free computer art software roughly comparable to Photoshop, found myself a tutorial, and away I went. Here is the first-ever map of Brittanis I actually feel comfortable publishing out to the public: 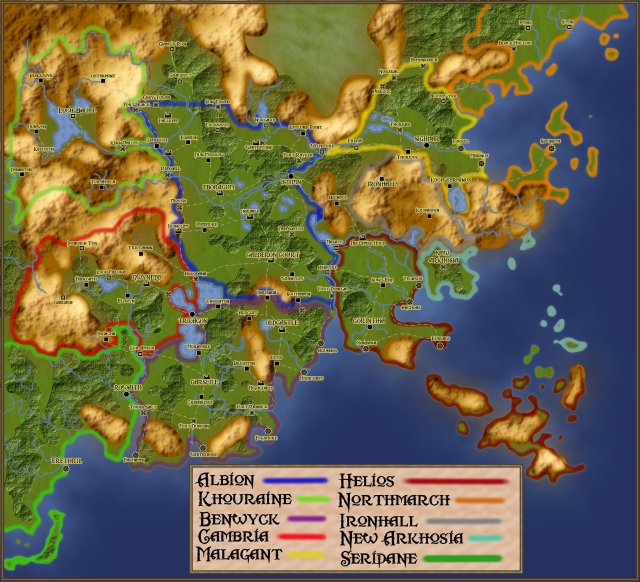 So check it out! Tell me what you think, and head over to the Cartographer Guild forums to do it yourself!

My next step is going to be a major city map– probably the city where the majority of play for my Google Wave game is going to take place!

4 Responses to Cartographer’s Guild = Made of Awesome